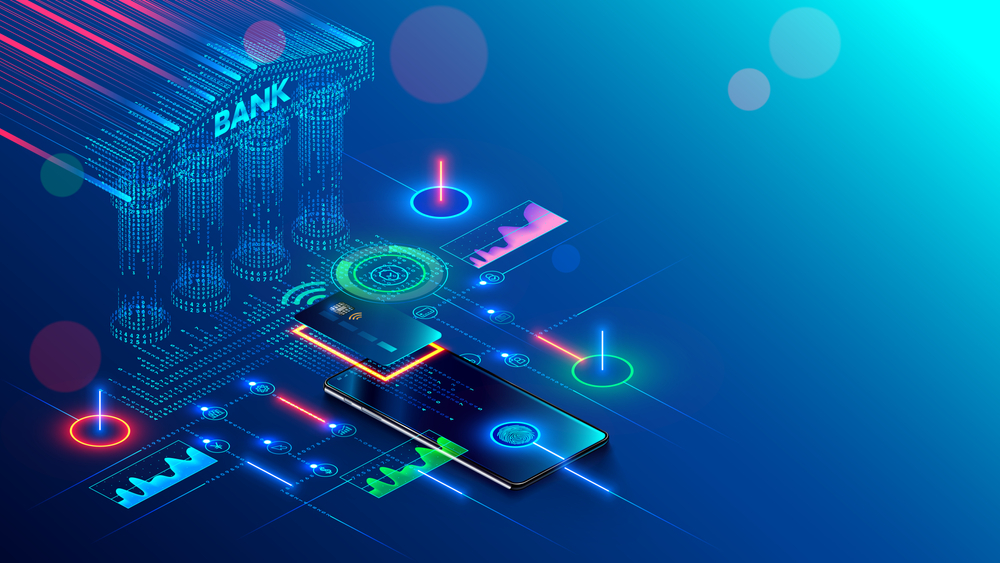 The Chief Information Officers of the banks are under extreme pressure. While the banks have to manage with insufficient returns on equity, the cost-cutting stress and IT demands are increasing. So, CIOs must explore the possibilities to control costs through productivity gains to accommodate budgets for investments in tech-enabled changes and generate business for the banks.

Banks have to counterbalance the increase in IT costs with productivity gains. According to the McKinsey Digital 20/20 survey of global banks, it is evident that IT cost had increased exponentially from 16.5% in 2014 to 18.5% in 2017. The run spend has almost remained flat while the change spend has increased by 40% at the same period. 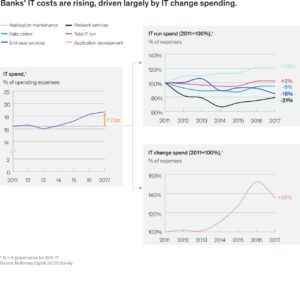 It’s an alarming phase for CIOs for improving the productivity efforts in banks. Aim for 25-40% of structural productivity gains in the coming five years to keep costs flat. 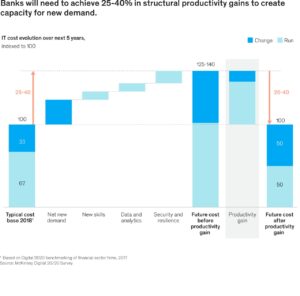 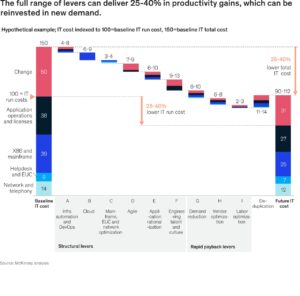 If the banks can review their IT expenditures periodically, they can lower IT demands significantly. It can provide 5-10% IT savings in less than a year. For example: focus on the projects which are directly linked to the bank’s strategic goals, plan to shift the workloads away from peak times, prioritize the value-add service to match actual demand, purging historical data, and so on.

Vendor optimization actions can provide 5-10% savings to the banks in a year. Reduce outsourcing costs by working directly with the vendors, introduce alternative pricing models to vendors, consolidate the relationships, etc.

The best way to distribute responsibilities is by mixing the labour models. Strategically allocate the work to balance costs with controllability, agility, and responsiveness by insourcing, strategic partnerships, outsourcing, and offshoring methods. Many banks and organizations prefer restricting the usage of temporary labour or hire only if there is an inadequate workforce for a particular role, which can save 20% of temporary labour costs.

Compared to traditional hosting, migrating to the public cloud can save up to 30-40% of the workload costs. Banks can mainly preserve 90% of labour costs with better management and reduce non-labour charges such as hosting and networking assets. Cloud transitioning also enables the other transformation levers, like infrastructure automation.

2. Infrastructure automation and DevOps at scale

With infrastructure automation and DevOps, 30-35% of activities can be automated across the IT chain like provisioning, testing, deployment, patching, and support. A European bank has lowered its IT infrastructure team by 45% in less than 9-months by implementing the automation and reducing manual intervention at any stage.

Agile enables CIOs to take ideas to market and speeds up the new functionality release quarterly to monthly or several weeks. It improves maintenance and application development efficiency by 20-30%, which banks can consider as savings or freed up capacity.

India has abundant talented and experienced software engineers. But, in view of lowering costs, many organizations offshore the work to novices, resulting in lower productivity. As many banks have insourcing roles for experienced engineers, it provides a competitive advantage and improves productivity.

If banks implement the simplification program by modernizing their application landscapes, they can reduce applications by 30-40% and save the application ownership costs by 15-20% per year.

Banks can lower their run costs by optimizing core infrastructure components that enable the other transformation levers. Usage of shared mainframe environment lowers 20-30% of costs. Helpdesk and end-user computing costs can be reduced through systematic root-cause analysis of common issues, and it saves up to 20-30% costs. Network costs can be reduced through software-defined networking that responds to demand fluctuations than provisioning fixed capacity.

Digital transformation keeps changing the banking landscape and appears to pressure the traditional banking system. However, growth is becoming gloomy for banks as the global economy is declining. Hence it is crucial for banks to build efficient IT delivery models to flourish in this environment.

Take a step towards aligning and achieving your business goals with technology.